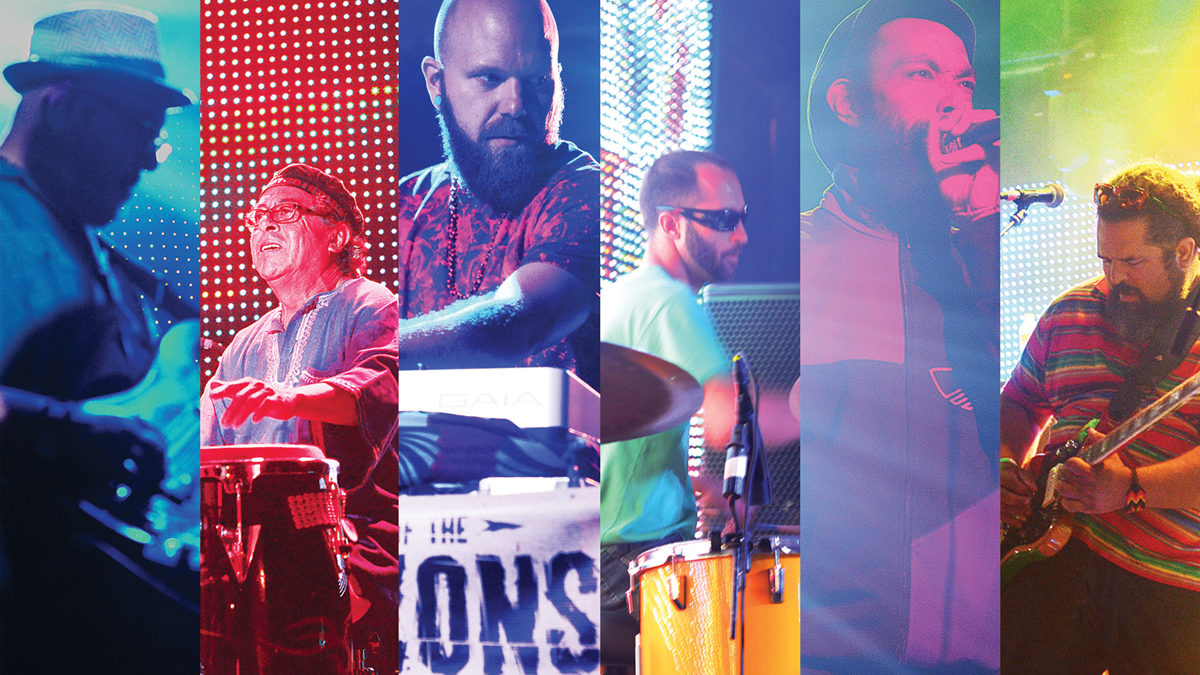 LET’S GET WEIRD
The Nag Champayons fill the room with a positive vibe!

In the intimate practice space of the Seventh Circuit in North Miami, six guys with varying amounts of facial hair tune their instruments. A fog machine sits on the floor coughing puffs of smoke into the air. On a large screen behind the stage, geometrical shapes and slides from vacations are projected. Then the jam starts. Samples from Noam Chomsky’s CD An American Addiction fight with bleats of bluesy sax. The samples become distorted and louder like you just did a Whip-It. “Ladies and gentlemen,” a voice announces over the mounting percussive tension, “we present to you, the Nag Champayons…” 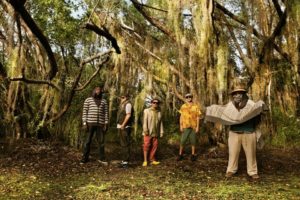 Have you ever orchestrated a soundtrack in your mind? It could be a soundtrack for driving through Wendy’s, taking a shower, dumping a body, or even trying on shoes at Foot Locker. Whatever. You probably wished you had a way so people could hear it. Or maybe it was just too weird and only warranted the “nod and smile” response.

The Nag Champayons create music that could be a soundtrack to the Apocalypse or maybe to a lazy ride down the Peace River. This six-man collective, composed of guitarist Jose Elias, drummer Nestor Prieto, saxophonist Harold Cardona, bassist Ed Cardona, percussionist/sampler Ryan Cacolici, and urban pundit/vocalist Kronos, gets experimental sound, music, and art together to do the freak nasty.

The Nag’s sound is like a game of Whack-a-Mole. Just when you think you’ve nailed it, another instrument is introduced, another sound is made, another sample is tweaked. Cacolici, whose long, well-manicured beard could well be the seventh member of the band, describes it as “world garage,” “an organized improv unit,” and “psychedelic jazz practice.” Take those descriptions and add a few of these instruments: marimbula (a large box you sit on to pluck metal keys), rackett (a small German instrument that sounds like a cross between a weed whacker and a bassoon), Boomwhackers (colored plastic tubes of different lengths that create different pitches when whacked on the ground), didgeridoo (a long, wooden, pipe-like Australian instrument that emits a haunting sound), a sax, bongos, a baby intercom, a synthesizer, a cowbell, a penny whistle. Confused yet? Eeeexcellent.

“We work towards cohesion of chaos,” Elias says. “It’s danceable and ambient, but we’re also an ensemble. And we’re comfortable having an odd-instrument department. We jam, we document, we develop. That’s the only way to keep track.” Elias has been friends with brothers Ed and Harold Cardona since they were kids, and they’ve jammed in local bands since their teens. Prieto and Cacolici have been the percussion junction for about a year, and Kronos stepped up to the mic a month ago.

Perhaps what is most refreshing about the Nag is its rejection of the traditional drums/guitar/bass lineup. Watching the group for the first time, the light bulb comes on. Of course! Electronic, dub, dance, hip-hop, Afro-Cuban, and free jazz can mix! Then, anything seems possible. Why not make music by banging on empty margarine containers, shaking a jar of jellybeans? Playing human skulls! It’s Frank Zappa and Serge Gainsbourg wrestling Antibalas Afrobeat Orchestra. It’s Sonic Youth’s plane crashing into Fela Kuti’s boat in the Everglades on the hottest day of summer.

Despite the comparison to politically fueled bands and the inclusion of samples from conspiracy theorists like Chomsky, the Nag isn’t necessarily politicked-off. “We are not at all a political band,” Cacolici says. “But we do read a lot, and you know where that leads. I incorporate the Noam Chomsky sample as an intellectual spur, with the focus on content, not intent. Really, we’re about everything. We started out with didgeridoo, sitar, percussion, and it grew from there. We’re still an organic band, even though the electronic aspect is there. We’ve all experienced very different lives to this point, creativity being the common ground. So we get together as friends and contemporaries to make beautiful.”
“What we do is ethereal but still a little hip-hop,” Kronos continues. “We all come from different musical backgrounds, so it works.”

And the music is beautiful, but there is also a climactic quality to it. Like soundtrack music, each piece fits together in the puzzle to resolve the tension of six people. On one of their untitled songs, they each grab a different-colored Boomwhacker and whack two cinderblocks until they all find a groove. When they do, it sounds like the Fourth of July. The song then sneaks off into a dub reggae dirge in which Kronos raps about an old roommate who used to do martial arts after smoking pot. Bassist/marimbulist Ed Cardona also takes over vocal duties on one song, dropping disjointed spoken word over a menacing drumbeat. The words somersaults and pancakes are intelligible. By the end of every jam, each member is vibrating in place like a powder keg with a half-lit fuse. And… scene.

Islamorada Community Entertainment’s Bay Jam Hand Painted auction Guitar bidding continues!
As of this morning we are up to $1250.00.
you can bed in comments or you can anonymously message or text me and I will post your bid. Thank you!!

I'm having so much fun relearning old songs. See if you can figure out what this one is about. The best interpretation wins a free print of this painting!

MY COMPLETE MUSIC COLLECTION FREE! A little present for your home quarantine time. This is a link to my full music library. Everything is available for free download. You may choose to pay something if you want but you DO NOT have to. Just enter...

David Feder
MY COMPLETE MUSIC COLLECTION FREE! A little present for your home quarantine time. This is a link to my full music library. Everything is available for free download. You may choose to pay something if you want but you DO NOT have to. Just enter...
View on Facebook